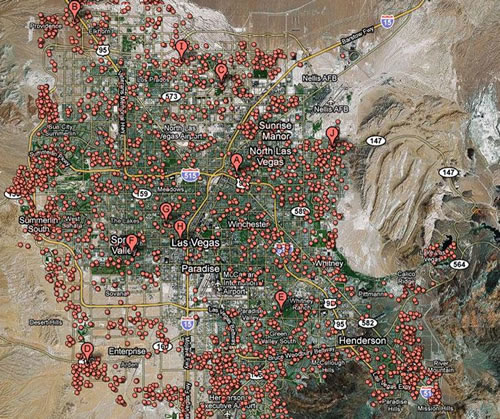 RealtyTrac is out with the total foreclosure numbers for 2010. On the whole things are getting worse.

72 percent of major metro areas saw an increase in foreclosure volume. Although some of the worst hit areas in Nevada, California and Florida improved from 2009, the foreclosure rate in these areas remains shockingly high. If not for some foreclosure suspensions due to the robosigning scandal, these numbers would have been higher.

For a frightening way to visualize the foreclosure crisis, we’re borrowing a Google maps technique described by Barry Ritholtz.

Click here for a satellite tour of the foreclosure crisis >

There are two ways to conquer and enslave a nation. One is by the sword. The other is by debt.

Severn Cullis-Suzuki: The girl who silenced the world….