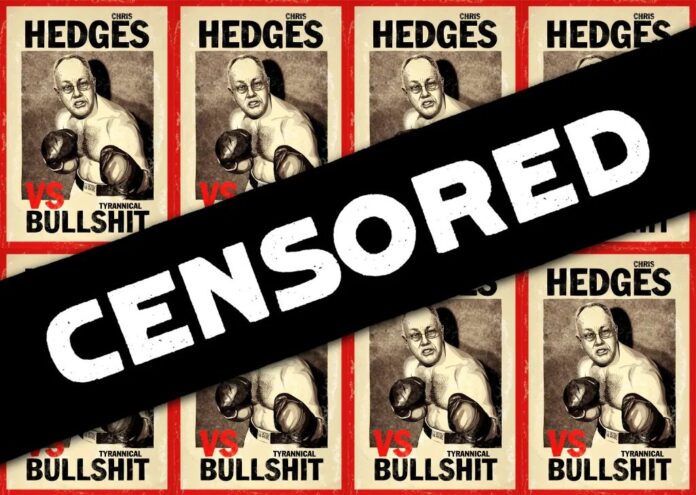 We are becoming a totalitarian state and this proves it.

Hedges: On Being Disappeared

I received no inquiry or notice from YouTube. I vanished. In totalitarian systems you exist, then you don’t. I suppose this was done in the name of censoring Russian propaganda, although I have a hard time seeing how a detailed discussion of “Ulysses” or the biographies of Susan Sontag and J. Robert Oppenheimer had any connection in the eyes of the most obtuse censors in Silicon Valley with Vladimir Putin. Indeed, there is not one show that dealt with Russia. I was on RT because, as a vocal critic of US imperialism and militarism and, of the corporate control of the two ruling parties, and especially because I support the Boycott, Divestment and Sanctions movement against Israel, I was blacklisted. I was on RT for the same reason the dissident Vaclav Havel, who I knew, was on Voice of America during the communist regime in Czechoslovakia. It was that or not be heard. Havel had no more love for the policies of Washington than I have for those of Moscow.

Forget all those virtuous words they taught you in school about our system of government. The real words to describe American power are “plunder,” “fraud,” “criminality,” “deceit,” “murder” and “repression.” And let me add “censorship”.

Aerial Photo Panorama of the Olympic-Village in Vancouver